One of the most wonderful aspects of horse racing is that it can produce magic at virtually any moment, even at 2:04 on a Wednesday afternoon. At that exact time, a horse who had already stolen the hearts of hundreds of fans became the focus of thousands of spectators. All eyes were on Juba.

Not only were people watching Juba, they were tweeting about him, sharing photos of him, celebrating, smiling and, in some places no doubt, crying. With the exception of his jet-black mane, he appeared as snow white as those horses Rodgers and Hammerstein wrote about. That’s how he looked on a computer monitor, at least, where so many were locked in on him as he broke from the gate at Gulfstream Park. Yes, they were watching on computers, as well as cell phones and iPads. You’ve got to get creative when you’re at work, or school, or wherever – it’s not like this race was on national television.

There was so much build up. Juba hadn’t run in more than a year, and a lot had happened in racing since then: California Chrome won the Kentucky Derby and Preakness, Wise Dan made a memorable comeback, and one of Juba’s stablemates, a horse named Wicked Strong, made a name for himself by winning the Grade 1 Wood Memorial Stakes in April and the Grade 2 Jim Dandy Stakes in July.

“Before any of them started (racing),” said Don Little, president of Centennial Farms, which owns Juba and Wicked Strong, ” … we kind of liked Juba a little bit more than Wicked.”

A son of leading American sire Tapit, the striking 4-year-old gray colt was purchased as a yearling in 2012 for $250,000. Little and his co-investors, or partners, immediately noted that Juba was “precocious” (a term that implies maturity at an early age), but he was also extremely playful. His overall pleasant demeanor, combined with his untapped potential, was all part of a package that, when combined with circumstance, would turn Juba into a social media sensation. 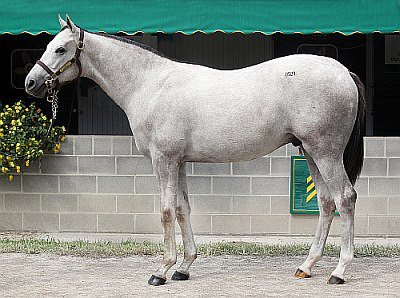 Juba as a yearling at Keeneland. Photo courtesy of Centennial Farms

The horse’s career didn’t begin with quite as much fanfare. In November of 2013, Juba ran in his first at Aqueduct. He didn’t win. He finished third. Juba didn’t win in his next start either, finishing second to eventual Grade 1 Florida Derby winner Constitution. More significantly though, in a workout after that race trainer Jimmy Jerkens noticed something wasn’t right with Juba. Tests revealed that he had a condylar fracture.

The injury was spotted quickly and treated immediately. Juba underwent surgery and there was hope that he’d return to the races, at some point. But no one was going to rush him back.

“Knowing that he was such a talented individual, we wanted to give him all the time required and then some,” Little said.

Within the next few months, it happened. A curious name appeared on Twitter: “@Jubacolt, Juba (the Gray)”. The account gave a voice to the injured horse. Much like his real life persona, @Jubacolt was playful and intelligent. He also demonstrated some previously unseen camera skills, tweeting photos from his barn with guests like his trainer Jimmy Jerkens and posting snap shots of his workouts. In all seriousness, one had to wonder who was behind a Twitter account of a little-known horse who had never even won a race before.

“I wanted to tweet as Wicked Strong because he was Jimmy Jerkens’ horse and was going to the Derby,” said the mystery tweeter. “But someone had already grabbed him. So I decided to go with his “teammate” Juba while he was rehabbing, to cheer Wicked Strong on.” 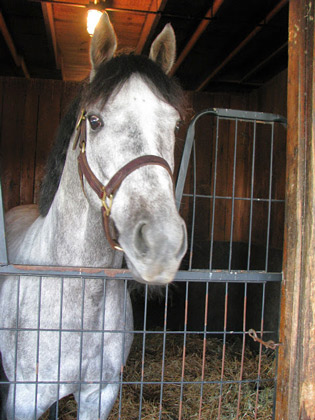 As it would turn out, Juba wasn’t a bad second choice for the tweeter who, in addition to being a dedicated fan of Jerkens, was struck by the horse’s good looks. The voice of @Jubacolt resonated with followers and the horse’s popularity started to grow.

“I originally envisioned having the account for a few weeks in the run up to Derby and Triple Crown season. I wanted the account to be a positive reflection on Centennial, Jimmy and horse racing, in general. I also wanted to keep it lighthearted and interactive. After about a week, I noticed a couple Centennial investors were following. From there, I contacted those investors directly and asked if they liked what I was doing. After getting really positive feedback, I touched base with Centennial to ask if it was OK if I continued. From there, my style seemed to draw people who loved the idea of chatting with a racehorse,” the tweeter said.

As Juba drew closer to his return to the races, the clamor surrounding him rose to a fever pitch. Supporters even created a hashtag for him: #GoJubaGo. In the days, hours and minutes leading up to the race, he’d nearly broken Twitter.

“From the time he entered paddock until about 3 hours post-race, my phone notifications kept my phone nearly in a constant vibration,” the tweeter said. “It was unbelievable. I couldn’t keep up with it in the lead up to the race. It was hopeless, at that point. I’m humbled that I was even a bit part to that popularity of the horse.”

Juba had already won over so many people that the result of the race itself was somewhat secondary. As it turned out, Juba ran an incredibly strong race. He had the lead late, tired and then fought on to recapture the lead nearing the finish line. But then, in the final 100 yards of the race, a fast-closing horse – also trained by Jerkens – named All the Way grabbed the lead and won by 1 3/4 lengths. A valiant Juba finished second.

“He easily could’ve come off the bit and checked it in but he fights,” Little said. “He doesn’t quit. He’s like Wicked. He fights right to the end.”

Everyone, from Centennial to the mystery tweeter to all of those people who set alerts on their phone to watch the race from home or work on Wednesday, could be extremely proud. After a serious injury and all that time away from competition, Juba proved there was plenty of substance to go along with his sexy.

“I do have a very close attachment, at this point,” said the tweeter, who has chosen to remain anonymous in Juba’s giant shadow. “I never intended it to happen but you would have thought I had mortgage money on him (when he ran) with how nervous I was … I can’t wait to see him again.”

Those words, spoken for many, reveal the power a horse can have over the human mind and spirit. That’s racing. Magic.